Alumnus Update: Lukas Van Daele has worked on Mirror's Edge Catalyst as a level designer at EA DICE in Sweden. It all started when Lukas created a Mirrors Edge mod (see below) during his summer holiday (DAE-ers never rest!) and that got spotted by the people at DICE. Lukas was invited to come to Sweden and that resulted in an internship where he first worked on Battlefield 3. We interviewed him on his latest work: Mirror's Edge Catalyst.

The last 5 years you worked on Mirror’s Edge Catalyst, what’s it been like to work in such a big production?

5 years is a really long time so you can expect there to be some bumps in the road, you need to have determination to meet the challenges head on and stick with it till the very end. After all the prototypes, tests and reworks that were necessary in our journey to reach quality I’ve got to say it was very rewarding to see it through from beginning to end. This was the first project I’ve worked on through a full dev cycle, rather than just helping out towards the end of production, and as a newcomer to the game dev industry that kind of insight was invaluable.

The number 1 challenge of working in a big production is communication and I don’t see that mentioned quite often enough. Game dev is a social job, especially as a designer since you need to communicate your designs across disciplines, over various different iterations. You need to be able to deal with all kinds of different team setups and personalities while you’re dealing with the stress of deadlines. Somehow you have to pull it off without rubbing anyone the wrong way. At the same time those interactions are what make this job fun, there’s so much to learn when there’s so much talent around!

What were you responsible for in this game? Which tools did you use, what does it take?

I was responsible for shaping 1 of the 4 open world districts in the game, Downtown, as well as most of the main- and side-missions that take part in it. Besides that, I also designed all 4 gridNodes (movement puzzle missions). Deliverables included the geometry and layout of the open world and mission buildings as well as all of the gameplay scripting and cinematic events. I used the latest version of EA’s Frostbite Engine, Photoshop and somewhat less interesting... Word. You’d be surprised how much documentation is necessary to keep everyone informed on the ever changing designs.

Can you tell us something about the pipeline?

After a detailed document explaining all of the events and how long they’re roughly expected to take (the beats of the level), we whitebox a level using a mix of Maya and our in-editor modelling tool “CSG”, similar to Unreal’s BSP. The designer scripts all of the events and combat scenarios with a visual scripting tool and then those are playtested.

The buildings in Mirror’s Edge Catalyst are built using part CSG for the rough shape and then we fill them in with 3D modules and bigger detail objects. Just the building shape alone without any gameplay or detail props ended up anywhere between 50-200 objects which took a hefty toll on performance so we requested a custom tool to be built by EA Guildford’s Frostbite Team to merge these objects into one mesh to get better real-time performance. At any time we could un-merge a building, edit it and re-merge it again which allowed us incredible flexibility. So perhaps surprisingly each single building in the game was uniquely hand-assembled rather than auto-generated or placed from a selection of premade buildings.

Instead of working in the single level (!) that was the city of Glass, the city was split up in zones and prefabs so you usually worked inside a building block prefab to iterate on gameplay.

Which steps have to be completed before your level is approved for the game?

We work according to a schedule that splits up the game into different phases, finally leading up to the alpha & beta release. We strive to get levels up and running as early as possible and then have a constant iteration process for those levels with sign offs after each phase.

The levels are playtested by the whole dev team on a rotation to get a feeling for the gameplay and we skim through the feedback and make changes accordingly. After certain phases the game is also tested externally with focus groups and we receive detailed reports with actions based off those. For Mirror’s Edge Catalyst specifically, the Level Design team also had weekly meetings in a less formal “living room” with a couch and big tv where we tested each other’s levels and gave feedback. Since we had an Open Beta we also skimmed the forums for feedback to act on.

Besides playtests that concern the fun factor we also have an internal QA team at DICE and an external one at EA Romania that test the game for bugs. Those end up in our bug database under the supervision of the development director who makes sure we’re tracking well towards release.

In conclusion, while there’s definitely phases and deadlines that need to be respected the whole process is fairly flexible under the agile development umbrella. A level just goes through constant iteration loops under the supervision of a lead level designer who makes sure the quality and technical challenges are met according to schedule. In the end the fun factor is what determines which parts of a level make it and which end up getting reworked before we ship the game, as such a definitive approval or when we call something done can be somewhat of a gut feeling.

Do you have a lot of creative freedom to introduce your own touch?

Even though the Mirror’s Edge Catalyst team at DICE grew to a size of 100+ it started off very small. In the beginning, on the design side, it was just me and a senior level designer doing all of the level concepting work. Considering the game was in development over a long period of time with only a ramp up of the team towards the end the amount of influence we had was enormous.

We got a story outline from the Narrative Director and then adapted that to some rough level outlines with events and gameplay scenarios. A certain level could be limited by needing to adhere to a certain tone or archetype (stealthy, combat focused, puzzle, …) to make sure the game as a whole felt varied and offered a contrasting experience between levels. But beyond that our imagination was the limit while working within those restrictions.

Since the gameplay in a Mirror’s Edge game comes from the actual environment it meant that us level designers, in collaboration with level & concept artists, were also responsible for a lot of the placement of props and general shapes of the environment. You start off with a very rough blockout and after much back and forth between the art direction and level design you end up with a level that is fun and looks unique. It takes the right mentality to work in this kind of setup, sometimes you need to stick to your guns and sometimes you need to know when to compromise. It can be challenging at times but this clash of form and function is where paper layouts turn into amazing levels.

In short, as a level designer you’re expected to work with a lot of limitations that come from technical or artistic sides and it’s your job to make sense of those and turn all aspects into a cohesive experience. A lot of the creative freedom comes from how far you can stretch those barriers and how you deal with the challenges you face.

The cold and dark days during winter took some getting used to as well as the total opposite in the summer where you never see the stars at night! Stockholm itself is a really nice city with beautiful architecture and cliffs near the water, you needn’t look long to find a postcard view. There are lots of green zones in the city and if you take the boat for an hour you’ll find plenty of small islands towards the sea that are perfect for a summer getaway. Sweden’s very clean and environmentally friendly, I don’t even own a car because the public transport is so convenient and punctual! On the professional side of things Stockholm is also a Game Dev’s dream since there are plenty of other studios, startups and talent around besides DICE.

Are you already busy working on a new project?

Absolutely, after Catalyst and taking some time off to clear my head I’ve helped a bit on Battlefield 1’s campaign but after all of the single player design I wanted to broaden my expertise in the multiplayer field as well. While I can’t exactly divulge what we’re working on at DICE at the moment, I can say I’m working as a multiplayer level designer on one of the biggest titles Electronic Arts will bring to market 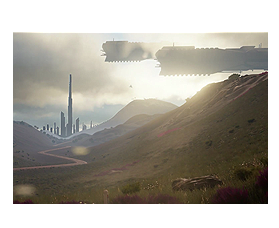