During the first half of the second year program, our students developed some amazing game prototypes.

But what are game prototypes I hear you ask!"
When designing games, the designer starts with a design problem and eventually redefines it.  In view of this problem, ideas are generated, selected and communicated within the design team. This is all done during what is called the creative process.  After the creative process has ended the team wants to know whether the game is actually playable. Therefore one can say that designing games equals taking risks. Some of the uncertainties are: “Will the game be fun to play?” or “Will it be successful with the target audience?” and “Can this game be created by the development team?” (Shell, 2008).
In order to map and minimize these uncertainties in an early design stage, prototypes are made. Prototyping is the creation of simple, incomplete models or mockups of a design. It provides designers with key insights into real-world design requirements and gives them a method to visualize, evaluate, learn, and improve design specifications. Good game prototypes are made quickly and inexpensively and allow the designer to give an answer to a specific design problem or uncertainty. Based on acquired game experiences and the feedback derived from the prototype, the design can be fine-tuned. This process is repeated several times until the game is fun to play.
Two quite different working methods can be applied during the design stage. The first method consists of writing out the game concept by means of a game design document that can be used as a blueprint and guideline during the creation of the prototype. The second method is just the other way around. The design team sketches some general game ideas without too much detail and these ideas are immediately tested by means of small, quickly made prototypes. Only after the prototypes are approved, the entire design document is written. In both cases, uncertainties about the design of the game are answered by prototypes before the game concept goes into production. Game prototypes are considered as being successful if they run on a flawless working gaming system that offers a gameplay experience based on meaningful play and if they are designed with a well-defined design philosophy in mind.

GamePrototyping1_2016-17_Candyland from DAE on Vimeo.

Candyland is about a happy boy named Baboosh. You navigate him through small stages in candyland by rotating the camera around the player / world. As everyone who lives here, he has heard the story about the legendary candy forest many, many times. The forest is said to have infinite supplies of all the candies you can eat. One day Baboosh finally takes off on his journey to try and find this magical place. On this journey he has to face many dangers and challenges, and others who are trying to keep him from his goal. As the journey progresses Baboosh encounters "tougher" challenges to complete as he gets closer to the candy forest. To complete one of the stages he needs to reach the magical candy cane that gives our hungry Baboosh energy to continue on his journey. In the end, whether the forest exists or not, it's all about the adventure!

GamePrototyping1_2016-17_PlanetNowhere from DAE on Vimeo.

Your character is stranded on an alien planet and needs to get her spaceship back in order to take off. In each of the four levels you have to collect the fuel cell to continue.You can move around the level, pick up objects, manipulate the level through various mechanics, and collect bonus items to increase your score. Each level introduces new features and mechanics which you’ll need to remember to solve all puzzles. “Captain's log week 8, day 7:I’ve been floating through space with no fuel for 5 days now, the scanners have picked up an uncharted nebula near by, the winds of space seem to be carrying me towards it, I anxiously await my uncertain future” “Captain's log week 9,day 3: My ship has been pulled in by a strange planet, I hope to find what I am looking for… Out here in the middle of nowhere”

GamePrototyping1_2016-17_SweetDeceit from DAE on Vimeo.

After a night of trick or treating, all your friends went home. But you didn’t, you wanted to do the last house, the house no one visited to trick or treat. But this halloween, you would. The house looks dilapidated but in a quick glance you see someone hiding behind the curtains. You are sure someone is home, and they will give you candies! You knock on the door. Nothing happens. You knock again, nothing happens. And before you knock for the third the time, the door opens, a bright purple flash blinds your eyes when an unknown force pulls you inside. You open your eyes and suddenly you are in a dark, sinister world. A world filled with zombies and carved pumpkins. But you don’t care about those, you only care about… ALl the candies, just look at them, spread around the world in diffrent colors and shapes! And what are those cauldrons with the green soup in it? You take a taste, it tastes great! But suddenly you remember mom wanted you home at 11pm, so you decide to eat and gather as much candy as you can and find a way out of this world!

GamePrototyping1_2016-17_WildWest from DAE on Vimeo.

The Game is set at a mining camp, where Toad has to collect a mining cart in order to proceed. The player first has to grab 3 different crates, and put them on pressure plates. Once the crates are in place, the player must climb up a rope and push the minecart. He will have to use a counterweight system to get the minecart down to ground level, by adding and removing a box on a platform. Once on ground level, the cart can easily be pushed into a small building, which will complete the level. There are 3 gems hidden in the level, which the player can collect. ;

GamePrototyping1_2016-17_ClubTodd from DAE on Vimeo.

The player’s objective is to reach the finish (a giant disco ball) by any means possible. The way to the end isn’t straightforward and will require some puzzling in order to get to the finish. Every level has numerous enemies in the shape of birds that can be killed once the player has obtained a megaphone, which there exists one of in every level. There’s also a bunch of collectibles, such as coins which are for bragging rights, and microphones which will boost the megaphone’s reach. But those are optional to collect. The player has to avoid taking damage, because the level will have to be reset once you’ve taken damage three times.

GamePrototyping1_2016-17_EasterHike from DAE on Vimeo.

The goal in the Easter Hike Levels is to get to the golden end star and in the meanwhile collecting as much eggs as possible. The level starts out with a couple of simple puzzles which demonstrate the mechanics and level elements. Boxes are placed all over the level which contain the eggs the player needs to collect. To get to all the boxes all the puzzles must be cleared. Arriving at a box, a player can destroy the boxes by hitting it with his carrot.

We have 3 main mechanics:

- The player has to move over moving bridge by timing his movement.

- Tiles are placed on the ground. When the player has walked over each tile once, the corresponding ground moves

up or down so a next part of the level is opened.

- Different boxes are placed all over the level which the player can destroy using his carrot. An egg pops out of the destroyed box.

In the level there are 2 types of enemies:

- In the air we find a bird that drops an egg on the player. If the player is hit by the egg, he is stunned for a couple of seconds 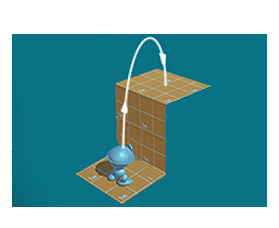