This course introduces students to the basic principles of game design. This way our students have a solid understanding of what makes a game tick when they move on to Game Projects in the second year.

Developing games is an iterative design process! A goal is set after analysis of the target audience etc.., then a first design is made. A prototype is developed and tested. Then this process starts over. The user feedback is used to improve the game in the next cycle.

Basic game elements are identified and discussed, existing games are analysed and adapted and students embark on their first real game design journey when they create their adaptation of existing games. 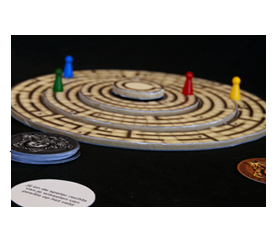