Usually in the VFX industry you’ll get live footage, greenkey footage, 3d rendered sequences, simulations, etc on your desk to create a composition in your post production software.

In this course we are going to analyse the secrets behind film and cinematography.

You will see how to develop an idea into visual storytelling and staging the scene. In editorial preproduction we will learn to work with the 180 degree rule and experiment with dynamical and directional optical axes. Together with alternately high, low and dutch tilt camera angles we will get the right screen positions in the several shots of a sequence.

As an art director and production designer you will determine the look and feel of your film. So you will search the right costumes and props and of course the actors.

As a director of photography you will frame the right close up, medium shot or panoramic long shot along with the relevant camera movement.

As an editor you will fluently cut each shot into the following one. With a little sound design we’ll get the right balance in image and sound.

First exercises on this content will be producing photoboards and short commercials.

Later on we’ll dive into the greenkey studio and learn to handle the several cameras, the crane and of course the green screen. Therefore we are going to use technical storyboards as the blueprint to film a shot: we will mark the specific notifications of the objective of the camera, the distance to the object, the light set up and light angle to shoot the right shot. Later on during the compositing of that shot there will be less surprises or problems that we can’t solve.

Mountainscape from Gabriel Hennessy on Vimeo. 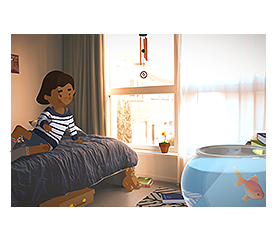